All You Need To Know About a Double Rainbow

The world is full of rare and astonishing things, and some feel rainbows are part of them. For most people, seeing a rainbow sends a thrill down the spine. It is normal, therefore, to experience … 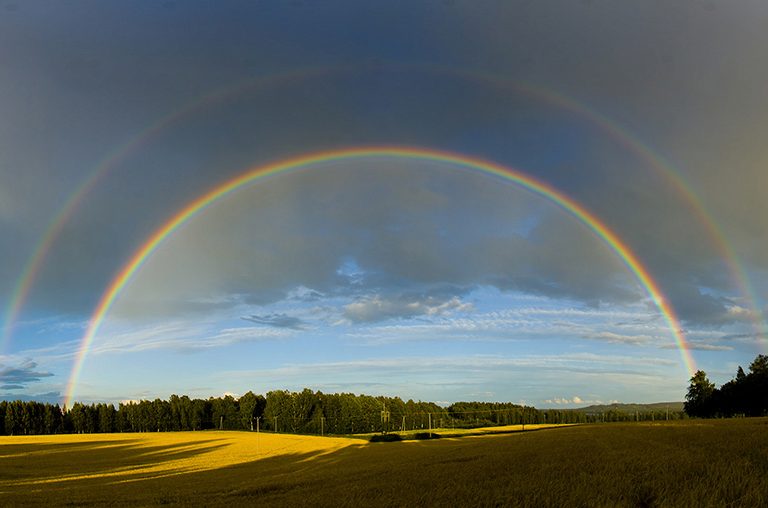 The world is full of rare and astonishing things, and some feel rainbows are part of them. For most people, seeing a rainbow sends a thrill down the spine. It is normal, therefore, to experience twice the excitement when a double rainbow is spotted. But are these the rarest types of rainbows? How are they formed? Are there big secrets behind them? We will try to answer these and other questions right here.

What Are Double Rainbows?

Before we explain further, it is important to state that there are 12 different classifications of rainbows, depending on the colors that are visible in the arc. These classifications still exist in double rainbows, but the emphasis is on how the rainbow arcs are created, as well as how they appear in the sky.

There are no big secrets in the formation of double rainbows. To understand fully, you need to appreciate how a single regular rainbow is formed. Normally, when sunlight enters a raindrop suspended in the air, it is refracted into multiple colors, and then reflected off the back of the drop. This process will form the standard commonest type of rainbow.

In some instances, the light entering the water droplet is reflected twice. Instead of a triangular line of reflection, the light will bounce off once more to make a square shape. This is how the secondary rainbow is formed. In some instances, three or four times once the condition is right. It is believed that larger water droplets that have been flattened by surrounding air are needed to make the light bounce off twice or multiple times.

The secondary rainbow normally forms about 10 degrees above the primary rainbow. When the conditions are right, triple or, quadruple rainbows can even be formed. It may be difficult to see these other rainbows since they will appear too faint.

Where Can You See Double Rainbows In Real Life?

Rainbows generally appear when water and light meet. In real life and most places, they appear after a rain shower or a thunderstorm. They can also appear anywhere where there is a perfect condition for sunlight to bounce off of the inside of water droplets suspended in the air. This means you can search whenever you are walking by a sprinkler, or when you notice that there is a fine mist in the air, and there is sunlight.

If you really want to observe a rainbow, you need to be conscious of checking after the rain. If you want to improve your chances of sighting a double rainbow, you have to look closely at dusk after heavy rain. This is the best condition for the phenomenon, but it is possible that you may not find it after several attempts.

Do Double Rainbows Have Deeper Meaning?

Some people share the belief that a double rainbow symbolizes transformation in life. Some claim it is a sign of good fortune or future success. If you are superstitious, such ideas are understandable. Considering it from the scientific angle, there is nothing too spectacular in a double rainbow. The phenomenon happens more often than many observe. In some instances, the secondary rainbow will be too faint for most people to observe.

Are There Higher-Order Rainbows?

Can You Create Double Rainbows?

If you are curious about seeing a double rainbow, you can create one by yourself. The simplest method involves using a jar of water and a bright light source in a dark room. You have to set up your light bulb or lamp on a desk or table as high as possible. Sit below the white light source with your jar of water.

With the jar directly in front of you, raise it slowly above your head till you see a reflected spot inside that looks like a rainbow. Keep raising it till a second rainbow spot appears. You can also create a double rainbow using a glass prism, strong sunlight, and white cardboard or paper. This is not the most natural kind of rainbow, so we will skip it here.

A double rainbow is a natural phenomenon that is more common than most of us assume. In many instances, regular rainbows have secondary rainbows. The reason we don’t see them often is that they are just too faint to be seen. Double rainbows are not the rarest kinds of rainbows, either. There are possibilities of a third or a fourth rainbow arc. Since they are too faint to be seen in most cases, we don’t realize they are there.