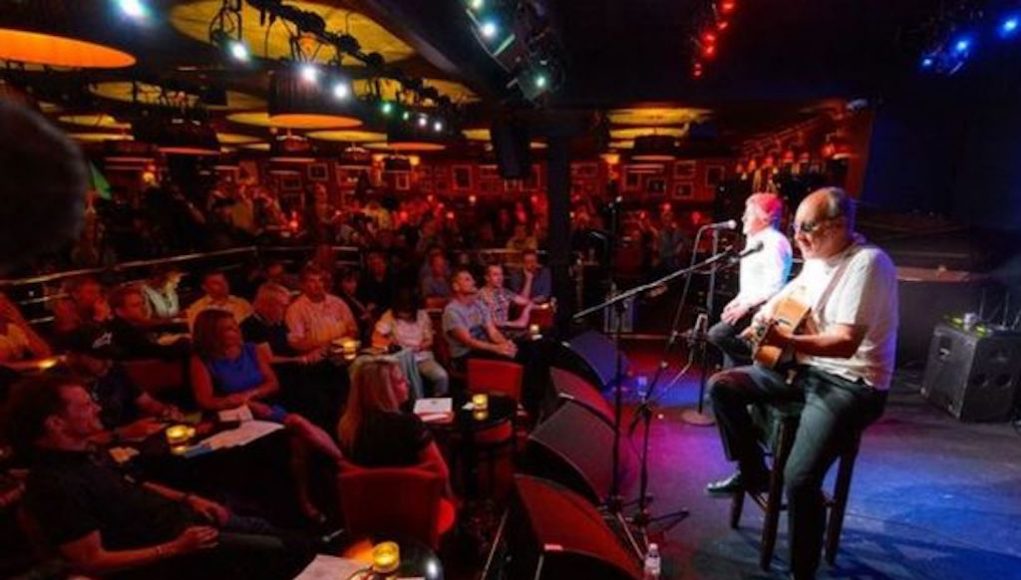 New York is referred to in many ways, with people often calling it ‘the city that never sleeps’, ‘the big apple’, or as the ‘concrete jungle where dreams are made of’, which was first coined in the song Empire State of Mind. A song that has been recorded by many artists since the original was recorded by Jay Z featuring Alicia Keys. New York has been lovingly named as having ‘the best of everything’ by locals and tourists alike, whether that’s theaters, architecture, food, or art.

Music enthusiasts have been flocking to New York for decades to get a taste of the vibrant music scene from East Village’s renowned rock joints frequented by the likes of Jimi Hendrix to Harlem’s rich history of gospel music. Although some of the historic bars and venues we’d love to visit have closed their doors, New York is still the ultimate playground for music enthusiasts and musicians. Whether you’re looking to take in some live music while enjoying a cold beer or recline at the theater while watching a show, we have the guide to help you make the most out of your visit to New York City.

Every tour of the music scene across New York should start with The Apollo Theater. Often referred to as ground zero of the Harlem Renaissance, The Apollo Theater has hosted many greats such as Ella Fitzgerald and continues to showcase modern-day icons like Lauryn Hill. However, the theater did not start out as a hub for musical greats. It began life as a burlesque theater in 1913, only receiving the name Apollo to remove connections to its burlesque past about 20 years after the venue first opened.

Carnegie Hall is a historic landmark of the NY music scene and boasts one of the most impressive lists of performers in the world. With phenomenal artists from Frank Sinatra, The Beatles, and Jay-Z delivering draw-dropping shows here, it is still considered a landmark feat in any artist or band’s career to sell out at Carnegie Hall.

This beautiful venue also has a long-standing history with the art world. The studios above the hall were once called home by many high-profile artists over the years, such as Isadora Duncan, Agnes de Mille, and Marlon Brando. Don’t just book tickets to take in a performance when you visit the iconic Carnegie Hall; try taking a tour around the building to learn more about the history, and hear stories about the artists that not only performed on the grand stage but lived in the studios above the hall. Tours often run into the director of archives Gino Francesconi, who can regale you with his boundless knowledge, unrivaled tales, and enthusiasm about the history of the building and musicians who have played there.

Located in South Harlem, Silvana is a hidden gem on 116th Street. Go for the amazing food such as spit-roasted meats or falafel, and stay for the live music offering everything from electronic rock to Brazilian jazz. Guests flock from all over New York City for the live music and outstanding food, making this bar a must for anyone looking to experience the diverse NY music scene.

Jazz is a genre that is all about improvisation and reinvention, every time you see a performance; you’re likely to see or hear something new. Many bands like the freedom for improvised solos when they get in the zone; this only enhances the music and the show, leading to a fantastic time every time you catch a gig. You’ll find Smalls Jazz Club is significantly less crowded than some of its more famous counterparts, but that just means you have the freedom for a more relaxed night to get lost in a sea of fantastic music rather than get lost in bustling crowds.

A worldwide phenomenon that started life a part of the London gig scene, Sofar Sounds regularly hosts gigs in nondescript locations all over New York, including secret bars, rooftops, or even random living rooms. Gigs are only announced on the day, but they are worth going for a chance to see artists like Vanessa Carlton, Gang of Youths, and Jorja Smith in an intimate setting. Book your tickets in a neighborhood of your choosing and wait for the adventure to begin.

New York City is well known for its thriving booze-in-the-sky scene; after all, NY is synonymous with its high-rise buildings and skyscrapers. With the number of high-rise buildings being constructed across the city continually growing, the popularity of clubs and venues opening on the top floor to give the customers the feeling of dancing and partying in the sky has increased. One of the best clubs for the NY music scene is Elsewhere, which is known for hosting some of the best live DJ shows in the city, as well as their extraordinary cocktail menu.

Since it first opened its doors in 1879, Madison Square Garden has become a household name for the NY music scene. Known as the ‘World’s Most Famous Arena’, Madison Square Garden has been named the ‘Venue of the Decade’ and ‘Coolest Arena’ by renowned publications such as Billboard and Rolling Stone. Top acts from all over the world have graced the stage at this legendary venue, including Madonna, Elton John, Stevie Wonder, Taylor Swift, Elvis Presley, John Lennon, the Rolling Stones, and most recently, the Foo Fighters. Bringing back live music to New York after a long year of lockdowns and restrictions, the Foo Fighters kicked off the move back to normality with their outstanding performance back in June 2021. The gig re-opening at Madison Square Garden will be one for the history books as fans, music lovers, and locals talk about the incredible feeling of having the NY music scene come back to life since the beginning of the Covid-19 pandemic. As music burst back into New York, we’ll be seeing more fabulous and iconic acts gracing the stage for music lovers to enjoy once more.

Art and Its Purpose

Patience And Perseverance – Why They’re Important For Drug Addiction Recovery

Hypocalcemia: how to prevent it?