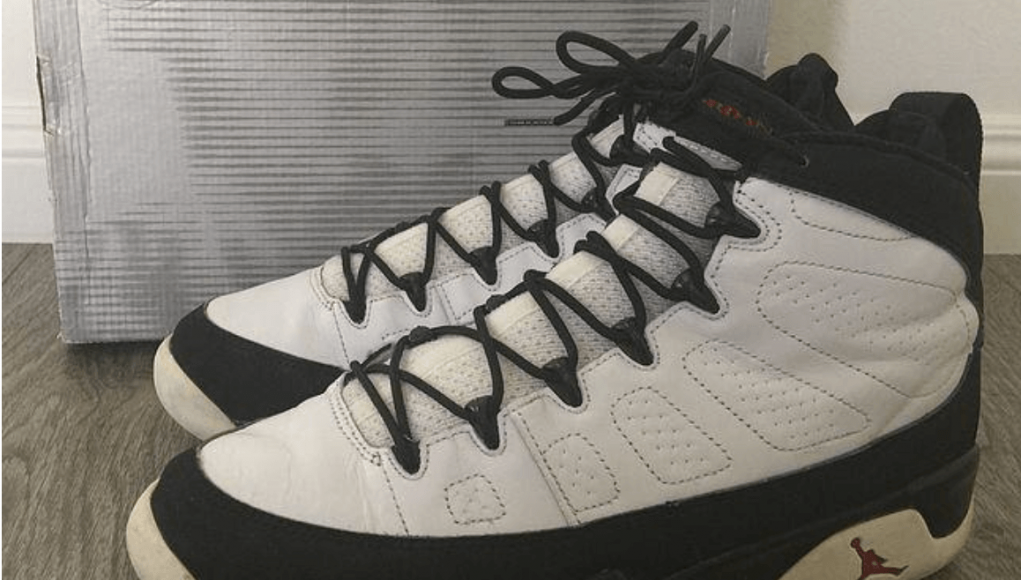 The year was 1984: Los Angeles was welcoming the sporting world with the Summer Olympics, Prince was topping charts with “When Doves Cry”, and the very first Apple Macintosh computer was going on sale.

It was also the year when a 21-year-old Michael Jordan went to the NBA as the third pick in the draft, signing for the Chicago Bulls. At that time, Nike was 20 years old and still considered an upstart, mostly focused on producing track shoes for athletes. Their coming together in 1984 was the start of an incredibly successful partnership that has raked in billions of dollars in revenue.

The first Air Jordan shoes were produced for Jordan in 1984. The history of Air Jordan is as surprising, controversial, and fascinating as the wider career of the 6-time NBA champion himself.

In this blog post, we will take you through the history of Air Jordan sneakers. We will go through the hesitant signing of the Nike contract by Jordan, to their initial ‘ban’ by the NBA, and up to the present day, where Air Jordans are rightly recognized as an iconic sneaker across the world.

Michael Jordan was born in 1963 in New York, with his family moving to North Carolina shortly after. In 1981, he would earn a basketball scholarship to the University of North Carolina. There, he quickly imposed himself as one of the most exciting up-and-coming players in the country.

The 1984 draft is considered one of the best in NBA history. After being overlooked by both the Houston Rockets and the Portland Trail Blazers, Jordan went to the Chicago Bulls, which had yet to claim an NBA championship.

Given his fame even at this early stage (both for his ability on the court and his infectious personality), Jordan had the opportunity to make sponsorship deals even before the start of the regular season. At the time, Converse was the official shoe of the NBA and had a roster of great players, including Magic Johnson and Larry Bird. Jordan didn’t partner with Converse, given they could not put him above their other sponsored athletes.

If Jordan had his way, he would have signed with Adidas, the German sporting giant. As a youngster, he had mostly worn Converse while being a keen admirer of Adidas shoes. Internal issues at Adidas meant they weren’t in a position to offer Jordan a contract, and instead, he was (eventually) encouraged to meet with Nike.

In “The Last Dance”, Jordan himself admitted that he was against the idea of signing with Nike. He had never before worn Nike shoes and, even when they offered him a lucrative contract and his own shoe line, he went back to Adidas. Jordan said: “I went back to Adidas and said, ‘Look, this is the Nike contract’. If you come anywhere close, I’ll sign with you guys.” However, it was not to be, and Jordan and Nike formally came together.

The first Air Jordan was designed by Peter Moore. It featured a red and black colorway that came to be known as ‘the Devil’s colors’. The reality is that there is still some myth over the ban imposed on the shoes by the NBA, due to the fact that the shoes violated the 51% rule. This rule dictated that NBA players had to wear footwear that was mostly white.

Nike’s marketing arm will tell you that the shoes Jordan wore at a pre-season game in Madison Square Garden in October 1984 were the Air Jordan I. However, the reality may well be a little different. These shoes were still being finalized and it was actually the very similar Air Ship prototype that outraged the NBA bosses.

In any case, the decision to effectively ‘ban’ the shoes due to their lack of white had the opposite effect. To explain this, we can look at the Streisand effect. This is a phenomenon that occurs when an attempt to remove information or a product has the unintentional effect of boosting interest and awareness.

Nike jumped on the controversy and launched commercials that promoted the Air Jordans as ‘banned’ shoes that created global attention. Jordan quickly established himself as a star of the NBA, and Nike’s fortunes changed completely. They had expected to earn $3 million from Air Jordan sales in 1985; in reality, they earned $126 million.

Following on from the success of the Air Jordan I came the Air Jordan II, III, IV, and so on. Jordan almost always wore Air Jordans throughout his incredibly successful career. He would go on to win half a dozen NBA championships and become a global sporting icon in the process.

The Air Jordans have been enormously successful for Nike’s and Jordan’s finances. In 2019, it was reported that the Nike Air Jordan brand was worth in excess of $3 billion. For Jordan himself, the shoes had earned him more than $1.3 billion.

Jordan the player will always be intricately linked with the NBA. So, too, will his sneakers. Check out kickscrew.com if you’re interested in learning more about Air Jordans, the best shoes around.

The Amazing History of Air Jordan

What started so hesitantly became a global phenomenon. Jordan is regarded as the greatest basketball player of all time. Nike today is the most valuable apparel brand in the world.

This has been the story of how a 21-year-old from North Carolina and a 20-year-old company from Oregon created history. Like this blog post on the history of Air Jordan? Be sure to check out our other informative articles on a wide range of interesting topics.

A Music Lover’s Guide To The New York Music Scene

THE DO’S & DON’TS OF ELECTRIC FENCING FOR LIVESTOCK

Compassionate Care For Methamphetamine Addicts: Learn What To Look For In...